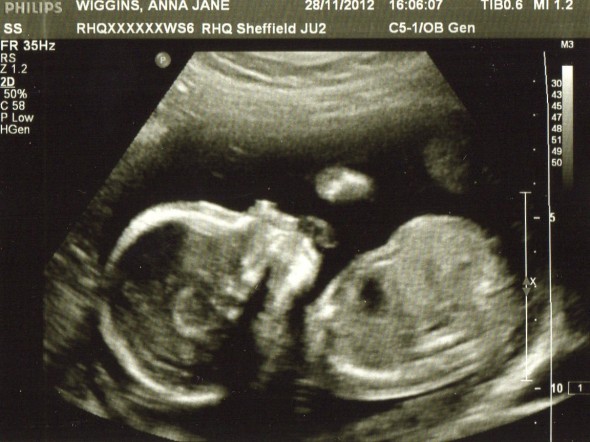 As it dawned on me that my body was no longer my own to do with as I wished, attention turned to my relationship with my breasts and the job they were about to embark upon.

After speaking to friends and family I realised that breastfeeding has been a dwindling activity in the western world over the past thirty odd years.

The current child bearing generation appears to not see breastfeeding as an essential requirement of motherhood. The proliferation of formula feeding and the saturation of marketing (although illegal to advertise breast milk substitutes) have encouraged mothers to enjoy the benefits of formula feeding, rather than the benefits of breast feeding for their child. Whereas an infant two hundred years ago may have died without breast milk, nowadays a mother can quite easily feed using formula and a bottle.

This issue is strangely under represented on the national set of ‘awareness’ campaigns. Sheffield council has provided a year on year decrease in funding for National Breastfeeding Awareness Week with 2013 receiving no funding whatsoever.

The reasons why women choose not to breastfeed are many and complex. Many women have decided not to breastfeed before the birth of their babies, and a great deal stop after the first week or two due to problems faced.

There is a huge amount of mother’s guilt associated with breast feeding and feeling of inadequacy plus fears of failure to continue. Anecdotally, many mothers I have spoken to, regret giving up. The major reason cited was being unable to find the support to continue through problems.

After interviewing specialist midwives and public health workers it became apparent that many women of this social group saw their breasts as sexual objects and did not feel that they owned their breasts. Rather, they needed to be preserved for the male gaze. Many of these women were not breastfed themselves and their peers predominately bottle-feed.

One of the midwives interviewed stated that teenagers could be persuaded to change their views on things whilst their minds are malleable to new suggestions. Is it possible to change their minds and make breast feeding seem natural and normal? Is it the whole family who needs educating rather than just the mother?

Anecdotally, many women not planning to breastfeed are able to change their minds on the subject during this first encounter.

The most high profile campaign in the last 10 years has been the Hub’s ‘Be a Star’ campaign. This took young mothers and gave them makeovers and had photo shoots with them breastfeeding. This appealed to the girls craving celebrity culture. Although striking and at first look, successful, initiation rates dropped when the campaign finished.

Hub’s ‘Be a Star’ campaign

Other countries use slightly more graphic imagery to address this problem. There is still a fear of showing the breasts in marketing campaigns that involve breastfeeding. I also visually researched one hundred breastfeeding logos to see common themes, colours and representations of the female form. 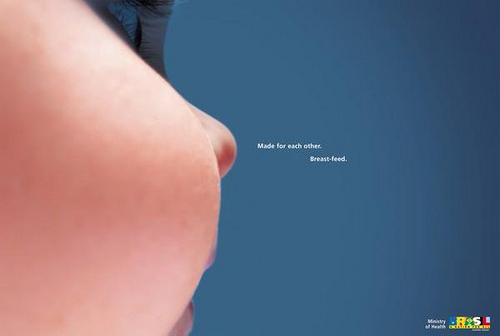 Brazilian Breast feeding ad, by Publicis Salles Norton for the Ministry of Health. 2010 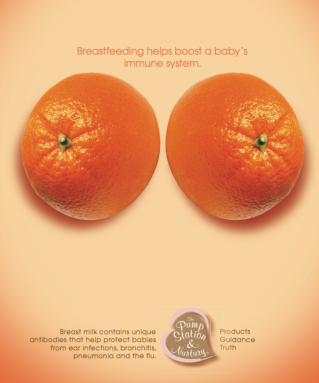 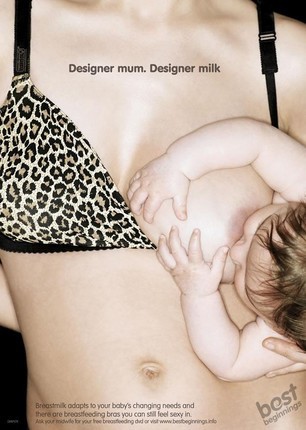 I have decided to use Sheffield as an area of study on both breastfeeding initiation rates and methods used to encourage breastfeeding. UNICEF, the world authority on breastfeeding, has granted Sheffield ‘Baby Friendly’ status. This has been achieved by providing training to all health care professionals involved in maternity care. Sheffield has a massive range of support for breastfeeding mothers…if you know where to look.

Sheffield is a leader when it comes to breastfeeding support in the UK, and can be used as an exemplar of successful rates of continuation of breastfeeding in the north of England. Sheffield has a 78% initiation rate for breastfeeding mothers. Although this drops dramatically after six weeks, this is a national problem rather than a local one.

When in the Jessop’s Wing of the Royal Hallamshire Hospital, after the birth of my son Billy Bob, I was approached by every midwife on duty, anciliairy staff and visiting peer support workers offering help with breastfeeding. In the delivery suite, all women are encouraged to breastfeed, even if it is only whilst in hospital so the child benefits from colostrum, the first incredibly nutritious milk.

With all of this knowledge of breast feeding initiation along with knowing the reasons why women choose not to breastfeed at all, what is it that I think I can achieve with my work, and who exactly am I appealing to?

Obviously as a graphic designer you work on briefs outside your own awareness/ comfort zone. Your job is to communicate and include audiences with whom you do not share a common language.

The audience for my work are those who do not initiate breastfeeding to begin with. Perhaps they are the ones most in need. If we could change their minds, even momentarily, we could make sure more babies have colostrum if nothing else.

I am aware of the health benefits of breastfeeding both to my baby and myself. I come from a stable domestic set up, I was breastfed and I want to breastfeed. But I still need help.

I have identified three areas to focus on:

please let me know what you think! Cancel reply